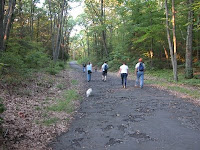 I've been thinking about inspiration a lot lately. It definitely comes in many forms, some far more motivating than others. A group of us climbed up Mt. Tom last night. It was a race for the top in order to see a simultaneous sunset and moonrise. Three dogs and seven people rushed from the parking area on Chapin Street to the Hawk Migration Observatory Tower on Mt. Tom in the Goat's peak area. It was fantastic, and worth all the hyperventilating to get up there in time to see it.
This photo does not do the moon justice! It was so huge and beautiful. And while the beers were being passed around, fireworks erupted in the distance, which we speculated must be from the Wilbraham Peach Festival going on over this weekend. On the way down (after dark, mind you), we were treated to a bat show and some other scary moments when the two black dogs with us would rush around in the surrounding dark forest and then jump out at us into our flashlight beams! It was pretty Blair Witch, but cool all the same. 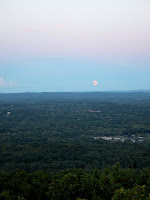 Posted by btaylor at 9:23 AM No comments: Links to this post 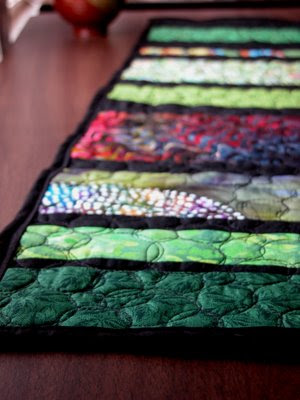 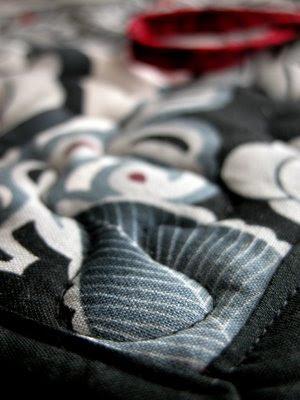 It's been raining for weeks now, which means there has been no guilt about staying indoors and working my bottom off. If there are times that I feel guilty for the amount of time that I spend "making" things, then it is when the sun is shining outside and it's green and beautiful, and I'm in the sweatshop, hunched over the Bernina sewing away. Luckily I have my machine placed on a table that sits right in front of a double window. This window provides an unparalleled view of the mountains of the Holyoke range. So when I start to feel guilty (and this is only guilty for my own self) I just glance up at the sun shining on the mountains and there, I'm enjoying the outdoors. With the windows open, then hey, I may as well be outside hiking as far as I'm concerned (minus the mosquitos though). Being in the studio is actually another matter all together....there, I can see even more of the extensive east to west mountain range, and get pretty direct sunlight from early morning until around 4 p.m. or so. It's just sheer beauty...windows open, the water in the canal rushing from the spillway, and the fresh breeze...again, I'm outdoors even though I'm perched at the easel for hours. It's ok to work constantly. Isn't it?
Posted by btaylor at 7:11 PM No comments: Links to this post

in the quilt shop

Promote Your Page Too